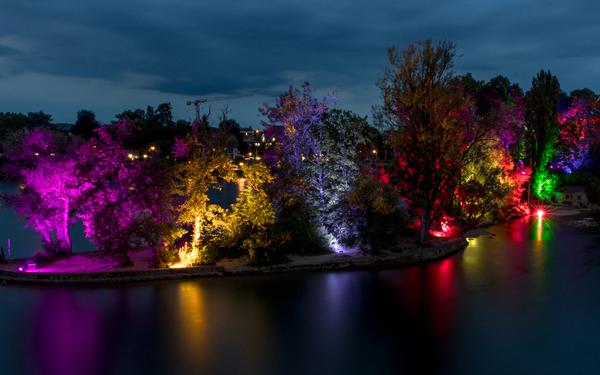 During the Swiss national holiday on the 01st August 2018 the Feldschlösschen brewery in Rheinfelden was illuminated in rich colors.

The Feldschlösschen brewery is extended over a length of more than 220 meters and four buildings. The illumination was done by Nova Event GmbH and exclusively with EHRGEIZ products. For the whole installation only 12 SuperNova RGBW were needed. Six BabyZoom 1 were used as an additionaly effect light.

“The SuperNova RGBW is made for such applications with large surfaces. Due to the wide beam angle and the enormous light output we had no problems to realize the illumination for our customer.” Says Vano Soleymani, CEO at Nova Event GmbH

On this special day the city planned to do a big firework. But due to the dry weather they were not able to this. But a replacement was found very quickly. The island “Inseli” that is located in short distance to the brewery shorthanded was illuminated as well and amazed the visitors with great colors.